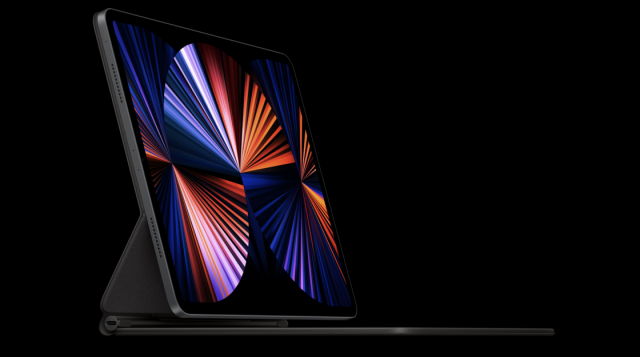 SCH CX – New Apple Review: The New iMac, iPad Pro Unveiled. Early this morning, Apple held its first online conference in 2021. At the press conference, the long-rumored Bluetooth item tracker AirTag was finally officially released, and the newly designed iMac equipped with the M1 chip was also officially unveiled; what is unexpected is that the iPad Pro series has been upgraded in addition to the regular configuration and 12.9 inches In addition to the version supporting the mini-LED display, the M1 chip has officially arrived on the iPad product line.

The new iPad Pro that arrived as scheduled does not use the upgraded version of the iPhone chip as before, but directly follows the Mac. Both new iPad Pros are equipped with an 8-core central processing + 8-core graphics processor M1 chip, computing performance Up to 50% increase, and graphics processing performance up to 40% increase. At the same time, Apple also announced the memory capacity information of the iPad Pro on the official website for the first time. The 128GB, 256GB, and 512GB versions use 8GB of memory, and the 1TB and newly launched 2TB versions use 16GB of memory.

Apple also equipped two new iPad Pros with a new 12-megapixel ultra-wide-angle front camera and brought a new character centering function, using machine learning technology, when you walk around during a video call, the lens will automatically follow And always put you in the center of the screen. If other people join or leave, the screen will automatically expand or shrink to ensure that everyone is in the right place on the screen. The rear camera still uses a 12-megapixel wide-angle lens and a 10-megapixel ultra-wide-angle lens. The addition of the M1 chip allows the iPad Pro to support the latest smart HDR 3 shooting.

In addition, the data interface of the new iPad Pro is upgraded to a Thunderbolt 4 (Thunderbolt) interface, which greatly improves the data transmission speed, up to 40 Gb/s wired transmission bandwidth, and can be used with an external 6K resolution Pro Display XDR monitor. The cellular data version of the new iPad Pro also supports 5G networks, which can bring faster internet speeds when going out.

As the previous revelations are consistent, Apple announced at this conference a newly designed iMac desktop computer equipped with an M1 chip.

The new iMac is equipped with a 24-inch 4.5K retina display, supports 500 nits of brightness, P3 wide color gamut, and displays more than 1 billion colors. The upgraded FaceTime camera supports shooting up to 1080p resolution video. With the image signal processor (ISP) and neural network engine in the M1 chip, it can improve the picture quality and intelligently adjust the exposure and white balance. At the same time, the new iMac also supports studio-level three-array microphones and six-speaker systems, which can effectively improve the quality of voice calls and use spatial audio functions to enhance the viewing experience when playing Dolby Atmos.

In terms of performance, compared with the previous generation 21.5-inch iMac, the M1 chip version of the iMac can increase CPU processing speed by up to 85%, and GPU processing speed by up to 2 times. Thanks to the high integration of the M1 chip, the 24-inch iMac has a slimmer body, and the narrow bezel screen design also makes the screen panel size comparable to the 21.5-inch iMac.

The 24-inch iMac is available in 7 colors: blue, green, pink, silver, yellow, orange, and purple. It comes with a braided charging cable of the same color, which is connected to the device by magnetic attraction. In terms of interfaces, the 24-inch iMac has up to 2 Thunderbolt/USB 4 interfaces, 2 Type-C shaped USB 3 interfaces (10Gb/s), and a Gigabit Ethernet port integrated with the power interface.

In terms of accessories, the Magic Mouse, Magic Keyboard, and Trackpad have added the same 7 colors as the iMac, which are matched according to the iMac color system. Among them, the Magic Keyboard adds Emoji buttons, Spotlight search buttons, dictation buttons, do not disturb buttons and lock buttons, and supports touch ID fingerprint recognition.

In terms of price, the entry-level 24-inch iMac (8-core CPU, 7-core GPU) only provides 2 Thunderbolt/USB 4 ports. The default keyboard is a normal version of the Magic Keyboard without Touch ID. The price starts at RMB 9,999 (256GB + 8GB); 8-core CPU + 8-core GPU version of the 24-inch iMac has 2 Thunderbolt/USB 4 ports, 2 USB 3 ports, and Gigabit Ethernet ports. It is equipped with a Magic Keyboard with Touch ID by default. The price starts at RMB 11,499 (256GB + 8 GB). The new iMac will be available for order on April 30 and will be officially launched in mid to late May.

After a long period of rumors, leaks, exposure, and other warm-ups, AirTag finally made its official appearance at this press conference.

AirTag is a device with a short-range induction search function through Bluetooth technology, users can use it with any item. If it is automatically paired with an iOS device, you can view its specific geographic location in the “Find” app. With the ultra-wideband technology brought by the U1 chip, users can even accurately check its position and distance on the iPhone to achieve precise search. Of course, you can also let its built-in speaker play a sound to indicate the position. You can easily find it in your schoolbag or under the bed.

One of the major benefits of using AirTag with everyday items is that it is convenient to retrieve lost items. Like other Apple devices, AirTag can also be set to loss mode. When other users “find” the device in the network to recognize the lost AirTag, it will automatically notify its owner of its location, which greatly improves the efficiency of finding the lost item.

Of course, there is no need to worry about AirTag causing privacy leakage. When another user’s AirTag leaves its owner, approaches, and stays near you, your iPhone device will prompt you. If you missed the reminder or did not find it, this AirTag will automatically play a sound to prevent you from being tracked by others using AirTag.

The durability of AirTag is also reassuring. The built-in CR2032 button battery can be used for more than a year, and it will be reminded by the iPhone when the battery is changed. The equipment itself is splash-proof, water-resistant, and dust-proof, and the waterproof reaches IP67 level (the longest staying time in the deepest 1 meter underwater is up to 30 minutes).

In order to better match with other items, the official website has a wealth of AirTag accessories, including keychains, buckles, lanyards, and bag decorations.

AirTag is priced at 229 yuan for a single piece and 779 yuan for a four-piece package. Orders will be accepted at 8 pm on April 23 and will be officially launched on April 30.

After 1,313 days of waiting, this conference brought a brand new Apple TV 4K.

The appearance and dimensions of the Apple TV 4K are exactly the same as the previous generation, and the improvement in hardware is mainly reflected in the internal configuration. The first is that it is equipped with an A12 bionic chip to ensure its powerful computing performance. Secondly, the communication technology has also been advancing with the times and has been upgraded to the 802.11ax Wi‑Fi 6 standard with MIMO technology and Bluetooth 5.0. Among them, HDMI supports HDMI 2.1, which guarantees the ability of 4K 60-frame HDR video output.

The evolution of hardware has brought a better visual experience. The new generation of Apple TV 4K will support the playback of 4K high frame rate HDR (Dolby Vision or HDR10 standard) video, with a video frame rate of up to 60 frames per second. At the same time, the brightness of the picture is higher, the colors are more realistic, and there are more details.

This generation of Apple TV 4K has added a color balance function. With your iPhone, Apple TV 4K can automatically calibrate the color of the TV screen to ensure that you can enjoy the better color performance on your TV at home.

This time, Apple TV 4K brings a new generation of remote control Siri Remote, the body is made of recyclable aluminum. The newly-added circular touch area allows you to fast forward or rewind the video conveniently, and the power button can control the switch of the TV, saving you the trouble of controlling multiple remote controls.

The Apple TV 4K this time is still divided into two specifications, 32GB and 64GB, the former is priced at 179 US dollars, and the latter is 199 US dollars. It will be pre-ordered on April 30 and sold in mid-May. There have been rumors that Apple TV will be put on the shelves in mainland China, but the official has not mentioned the news in this regard.

Apple on the line while the podcast creator of the site, offers similar developer podcast content management tools for creators, you can listen to manage the program and view the data. Podcast creators need to pay $19.99 per year.

Apple has also surprisingly added a new purple color scheme to the iPhone 12 and iPhone 12 mini, which will be pre-ordered at 8 pm on April 23 and will be on sale on April 30. The official iPhone silicone case, Apple watch strap, MagSafe leather card case, and Powerbeats Pro are also available in new colors.

Wine 6.3 released with many low-level improvements